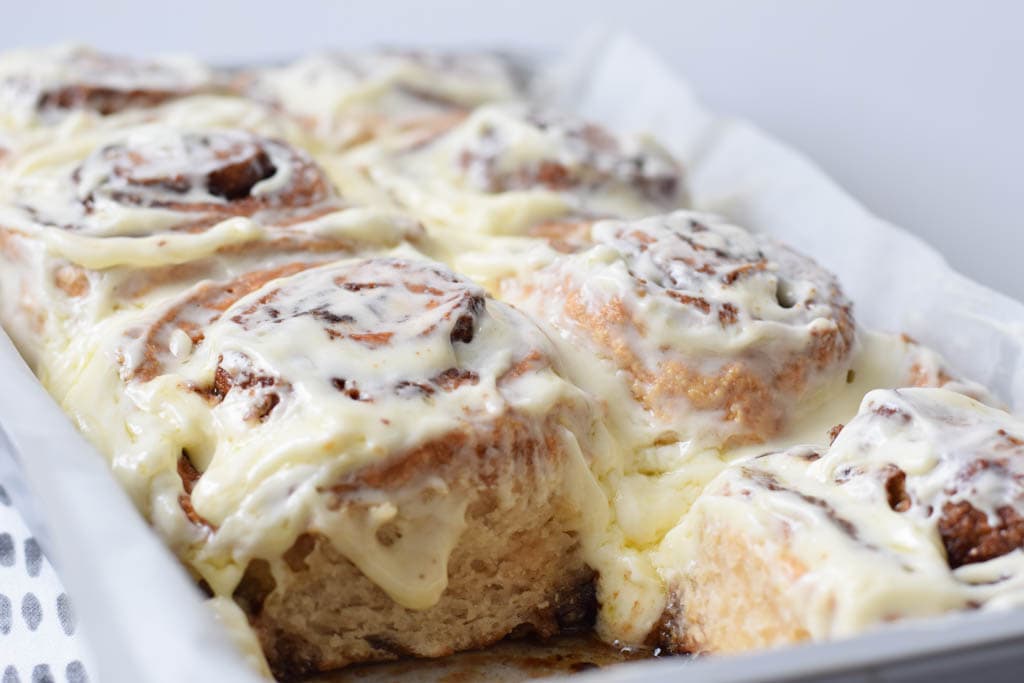 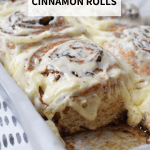 Ohh cinnamon rolls. A soft bread roll with a mix of butter, sugar and cinnamon in between topped with a divine cream cheese frosting. If that doesn’t make you drool, I don’t know what does 😉 The best festive breakfast you can have, if you ask me. Today, I share a recipe for gluten-free and low FODMAP cinnamon rolls to serve with a brunch, festive breakfast or just whenever you want!

Don’t be afraid to serve these cinnamon rolls to your friends and family too, because also people who don’t have to eat low FODMAP will like them! When I had just baked the cinnamon rolls, I had to leave the house to go to the supermarket and I knew that my boyfriend could come home any second.

Usually, I always tell him that he cannot touch the things I baked because I still have to take pictures of them for the blog (he has such a hard life, haha). But I already did that this time, so I left them out on the kitchen counter.

I knew that they wouldn’t be safe when he would come home 😉 And guess what, when I came back from the supermarket two cinnamon rolls had disappeared. That is always a great confirmation for me that I have baked something tasty. My boyfriend is usually quite picky when it comes to liking cakes and bakes, so this definitely was a winner! 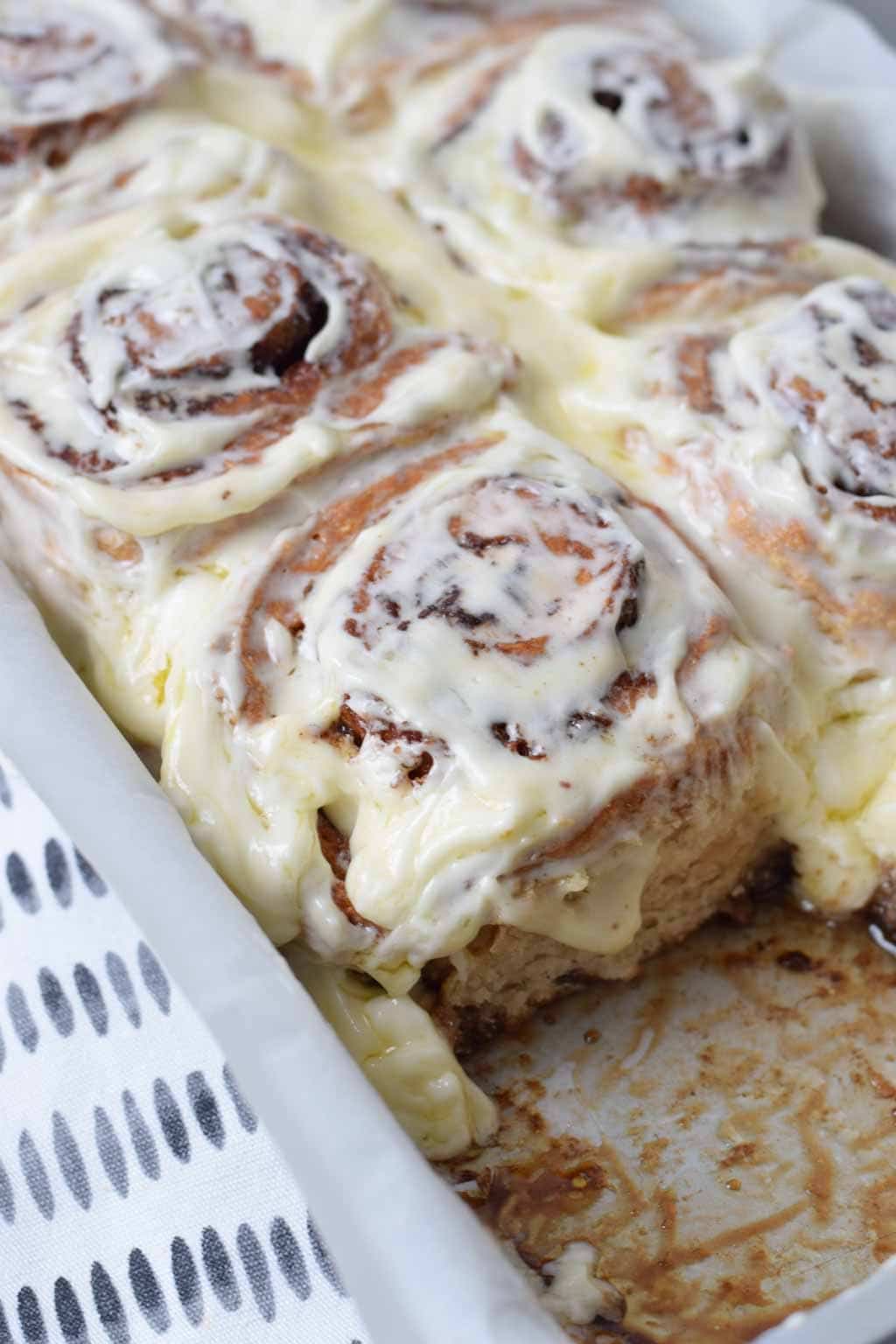 I tested two different flour mixes for this recipe. I made my own gluten-free flour mix that contained the following ingredients:

Next to that, I also made the low FODMAP cinnamon rolls with a gluten-free bread mix from our local supermarket (in the Netherlands, this was the free from mix for brown bread from the Albert Heijn brand). This mix is made of 36% rice flour, 18% teff flour and 36% corn and potato starch.

I personally preferred the version of the cinnamon rolls that I made with my own flour mix. Simply because these cinnamon rolls looked a bit nicer. The ones that I made with the mix for brown bread were a little darker and my own flour mix made more white looking buns. Concerning the flavour, I found both of them very tasty, so for that it really didn’t matter what kind of mix you used.

For me a mix that contains different kinds of gluten-free flours and also starches (in a lower amount than the flours) usually works fine. I have also tried mixes that only contained starches and that never works well for me when I want to make a recipe with a bread-like texture.

As you can see, the cinnamon rolls made with the mix for brown bread look a bit darker: 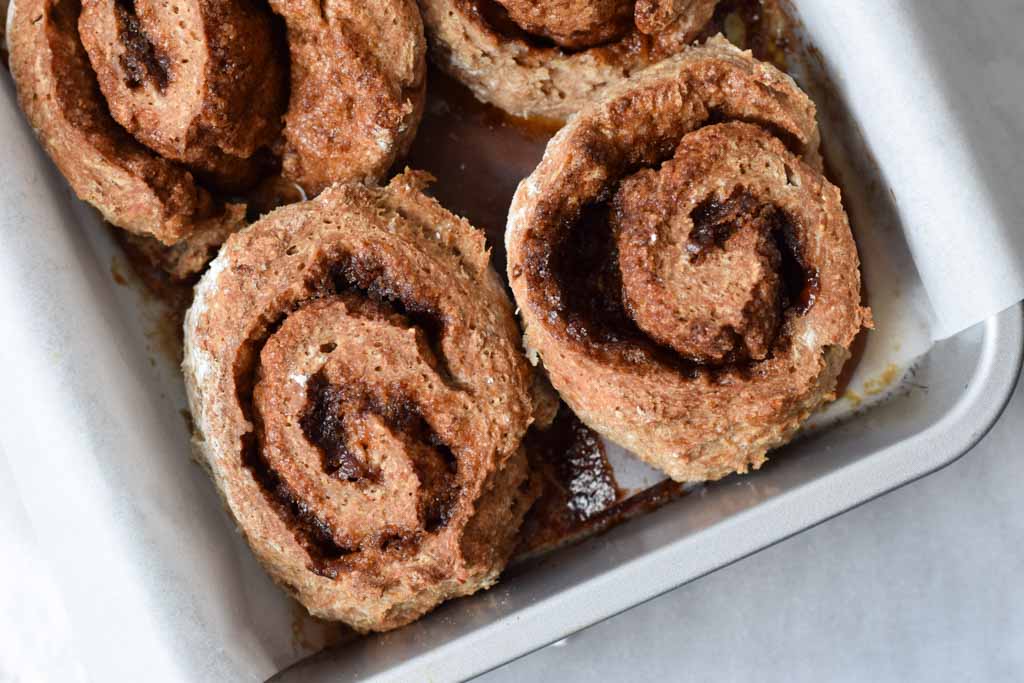 Working with the dough for the low FODMAP cinnamon rolls

After you let the dough rise, it will be quite sticky. To make it easier to handle, you can best put it into the fridge for half an hour before using it. Sprinkle some flour over and around the ball of dough and also sprinkle flour on your kitchen counter. Then press the dough into a triangle. The dough should be about 1/4 inch thick (6 mm).

If the dough is very sticky, you can add some more gluten-free flour. Don’t add too much because then your cinnamon buns might turn out a bit dry. This is always the tricky thing about working with gluten-free dough. Your bakes can easily get too dry and therefore you usually have to work with a slightly wet or sticky dough.

After you have spread your melted butter and the sugar-cinnamon mixture over your dough, you can roll it up. This has to be done carefully too because the dough is sticky. I carefully loosened the dough from the kitchen counter on the long side and then pressed it over the layer of dough and like that I was slowly rolling it up. Put some flour onto your hands to make it easier to handle.

Will you let me know if you have made my low FODMAP cinnamon rolls? I would love it if you would let me know what you think about the recipe by leaving a reaction and a rating below. You can also share your creations with me by tagging me on Instagram @karlijnskitchen or by using the hashtag #karlijnskitchen. 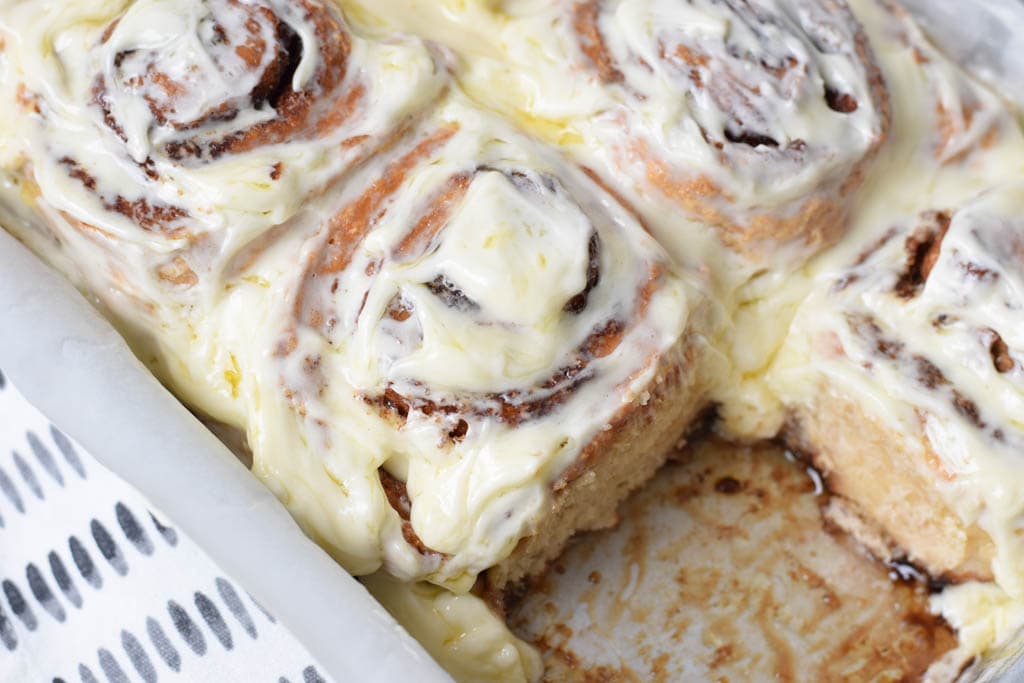 Warm low FODMAP cinnamon rolls with cream cheese frosting. Hmm, are you getting hungry yet? A delicious festive breakfast or brunch! Low FODMAP and low in lactose.

Storing: the cinnamon rolls taste the best when you eat them within 1-2 days. You can store the in the fridge in a closed box for up to 4 days. I prefer heating them up before I eat them. You can also freeze the cinnamon rolls, in a closed box or in plastic foil, without frosting. Let them come back to room temperature when you want to eat them. Heat them in the oven for a few minutes and then spread the frosting on top.

Are you going to organise a festive brunch or breakfast? These low FODMAP and gluten-free recipes are also perfect to serve: 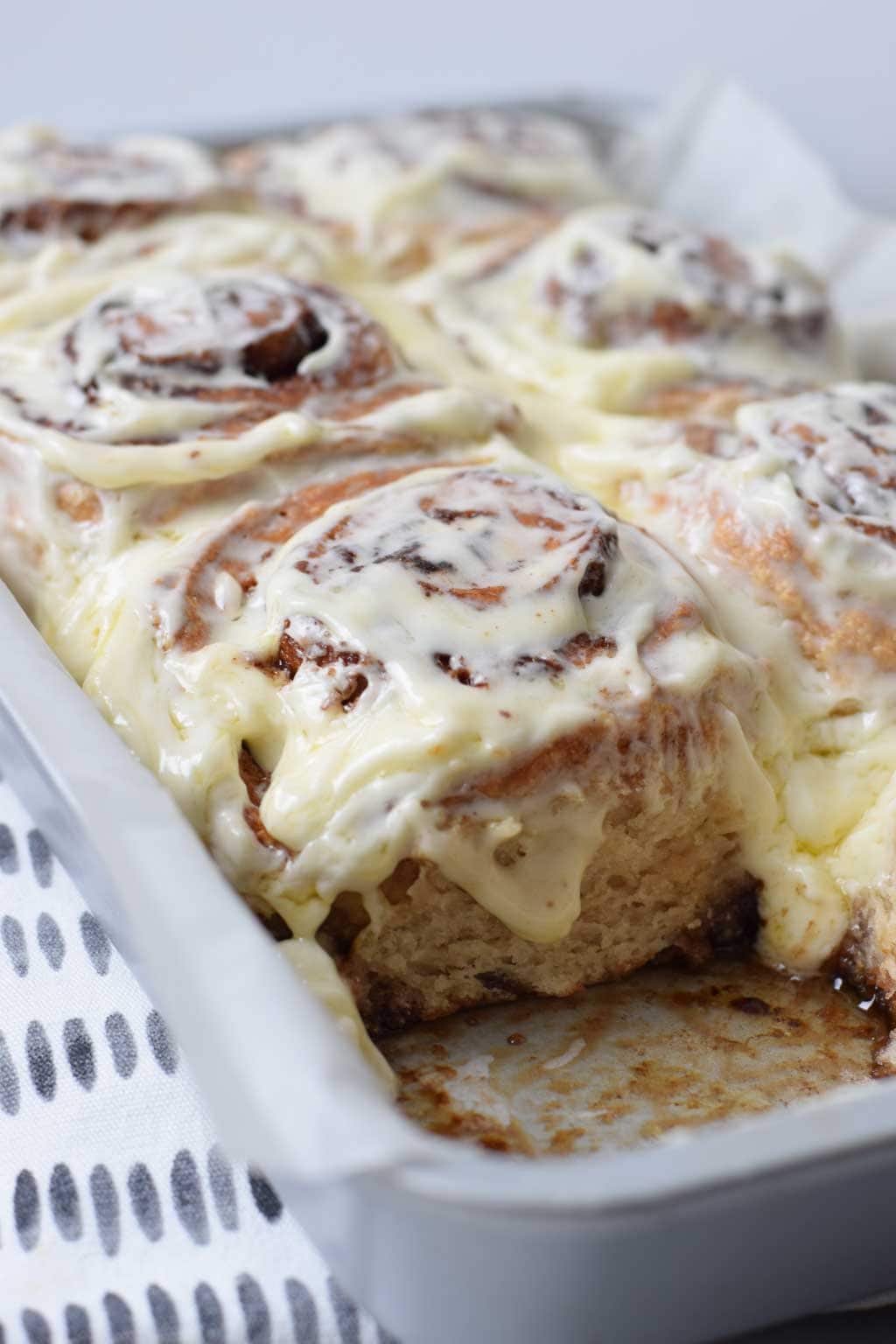