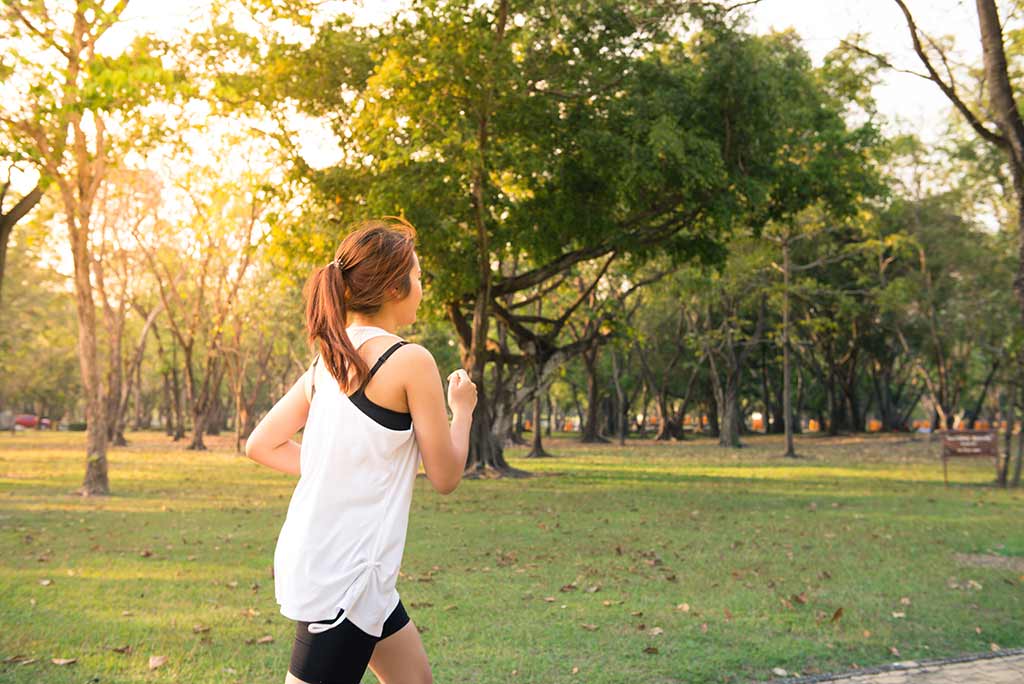 On the 14th of October I ran my first ever half marathon, the half marathon of Eindhoven. I already told you about my prep for this long distance run in the first blog of this series. In this blog I want to tell you how I have experienced my first half marathon and how I dealt with my IBS.

It was the end of 2017 when I decided to run a half marathon in 2018. We had a dinner with colleagues and a few of them got the idea to run a half marathon together. When they heard that I had run a 10K a few times they said “Oh Karlijn, then you can  join us!” I personally wasn’t convinced that easily. I said “No way you are going to make me run 21 kilometers voluntarily. I do like running, but 10K is far enough”. But after that, I didn’t stop thinking about actually trying to run 21K and decided to go for it. I thought, I still have 10 months, so I should be able to do it. I looked up a running schedule for the half marathon and I started to train. I thought, I will just start my schedule immediately, so I will be sure that I have enough time to practice.

But I kept thinking that the half marathon was still very far away a little too long. I didn’t follow my schedule so well and I only focused on the distance by doing long distance runs. I did my long distance run religiously every Sunday. I started with 10K and built it up to 18K, but apart from that I hardly trained. When I still had two months until the half marathon, I started to worry if I would be able to do it, actually run those 21 kilometers. On a Sunday, I decided to just try it during my training and I managed! I am not a fast runner, so it took me 2 hours and 45 minutes, but I did it. That gave me some confidence.

It was also around that time that I realised that I didn’t stick to my training schedule at all. It is important that you make enough kilometers during your half marathon training, to get used to the distance that you are going to run. Usually you do that by training at least three times per week. A long distance run, a shorter distance run and an interval training. I focused too much on my long distance runs, but actually hardly did the other runs. I often trained only once and sometimes twice per week. That was when I realised that I might have underestimated the distance. 21K is a long distance and it takes quite some preparing to do it well.

I choose a half marathon in autumn on purpose because I thought, I don’t want to have the risk that it is 30 degrees on the day of the half marathon. In the week before the half marathon, the weather forecasts already showed that it would be quite warm. At first it said that it would be raining with 23 degrees. That was still not too bad because the rain would cool everything down a bit. But two days before the half marathon the forecast suddenly changed to 25 degrees and sunny. No rain or clouds at all. I didn’t expect that at! I had already put away my short running clothes for the winter and I never expected having to run in short pants during this half marathon. Running in warm weather always makes me quite nervous.

In summer I did a 6KM run on the middle of the day and I got overheated a bit. I started feeling dizzy and had to throw up. Luckily I felt better after that and managed to finish the run, but I am always afraid that I will faint during a run when it is warm. I took extra care to make sure that I was hydrated enough. I started to pay attention to drinking a lot in the days before the half marathon and during the run I made sure that I stopped at all the care stations to drink some water and take a sponge with me. I have learned that the sponges are really important to cool down your body and using them every 5KM really helped. 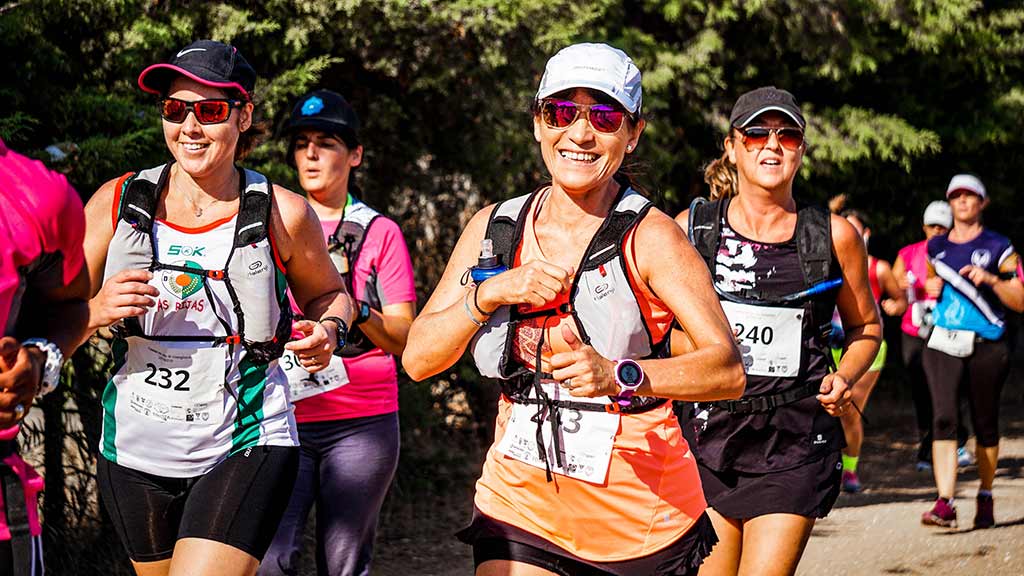 The days before the half marathon

The days before the half marathon I really paid attention to what I ate. The last thing that I wanted to do was to eat something wrong and have an upset tummy during the run. A meal that worked well for me before runs were pancakes (homemade gluten-free pancakes) with strawberry jam (make sure no high FODMAP ingredients are added) or icing sugar. I ate this on the evening and morning before the half marathon.

Two days before the half marathon, I went for a very short run and I suddenly started to have pain in my upper left leg. I didn’t have any troubles at all for the last months and two days before I suddenly get a pain, how convenient. With every step I took, I felt my leg and that made me quite nervous. Nerves have always had a very big impact on my stomach. I also have this when I have to give a presentation or training. Usually I don’t even feel really nervous, but as soon as my gut senses only the slightest nervousness it goes into full error mode. Read: having to run to the toilet several times per hour. Horrible and something that you really don’t want to have during a half marathon. I ended up taking some Imodium because that is the only thing that helps for me at moments like these. It is not ideal because I always notice that my stomach doesn’t feel totally ok and I also felt a slight pain in my stomach during the run, but luckily that was all. The funny thing was that the pain in my leg, that I was worrying about so much, totally disappeared as soon as I started running.

The combination of my not-so-great preparation and the weather made that I didn’t expect to run a (for me) fast time. Because it was my first ever half marathon, my main goal was to finish within 3 hours. If I would manage that, I would be happy. When I ran the 21,1K during my training, my time was 2 hours and 45 minutes and I secretly hoped that I could improve that. But when I started running it became clear very soon that that wasn’t going to happen. After 3 kilometers my speed had already fallen to 8 minutes per kilometers, which is even quite slow for me. I just couldn’t run faster. I bought new shoes about 3 weeks before the half marathon and I didn’t run on them as much as I wanted. Not very smart. At about 10 kilometres one of my feet started to sleep a bit. My new shoes are from Saucony and even now, a few weeks after the half marathon, I still don’t run very comfortably on them. They are quite tight around my feet and that doesn’t always feel comfortable. I am going to try them for a little longer, but otherwise I am afraid that I have to buy another pair of new running shoes.

With still 9 kilometres to go I was totally done with it and really couldn’t run comfortably anymore. My foot hurt, it was hot and I just didn’t feel it. I really had to drag myself through for the rest of the half marathon, but stepping out was not an option. With 3 kilometres to go my friend was there to cheer me up and at the last kilometer my parents and boyfriend were waiting for me. That gave energy to continue. My parents were apparently worrying that I wasn’t going to make the three hour mark. My mom shouted at me “Karlijn, you should hurry up, otherwise you won’t make it within three hours” . I didn’t even think about not making the three hour mark, but when I checked the time, it was actually quite tight. I finally finished with 2 hours 57 minutes and 33 seconds. Only 2.5 minutes within the 3 hours. A lot slower than I had initially hoped. But on the other side: this was my first half marathon, I didn’t have a clue what to expect and the circumstances weren’t great either. The good thing about this is that I have a lot of room to improve my time the next time. Because that next time is coming, I am sure about that. I want to train better, I want to be better prepared and I want to run that 21K without feeling like I am dying when I am only half way. So that is my next goal! Now I still have to motivate myself to keep running in the dark autumn and winter weather ;) 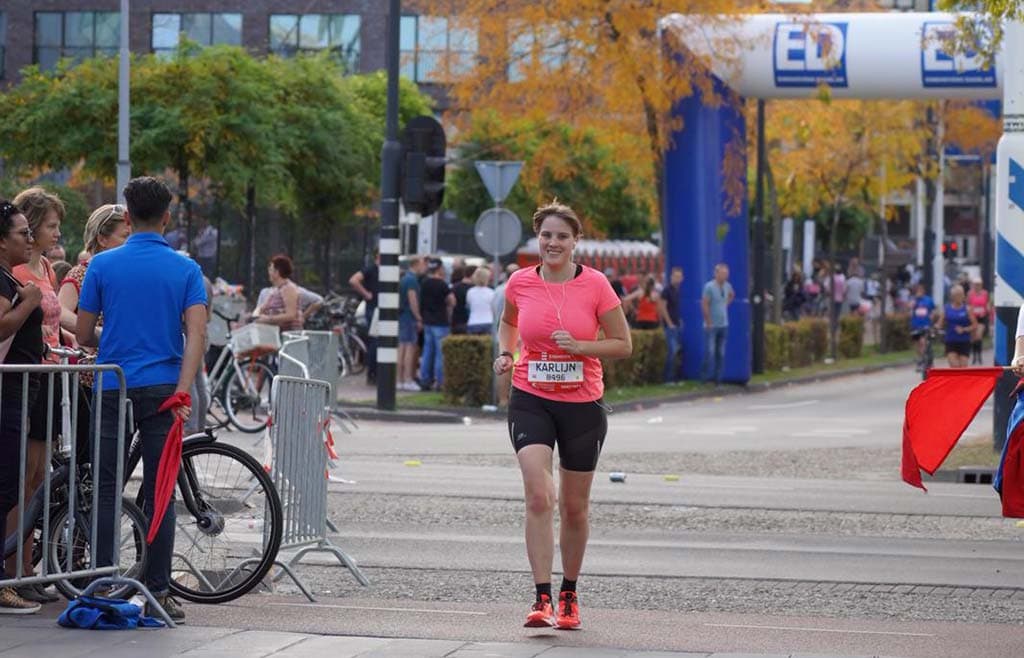 That was my half marathon experience! I am really curious if there are readers who also run and how you deal with running with IBS! Have you ever run a (half) marathon? And how did it go?