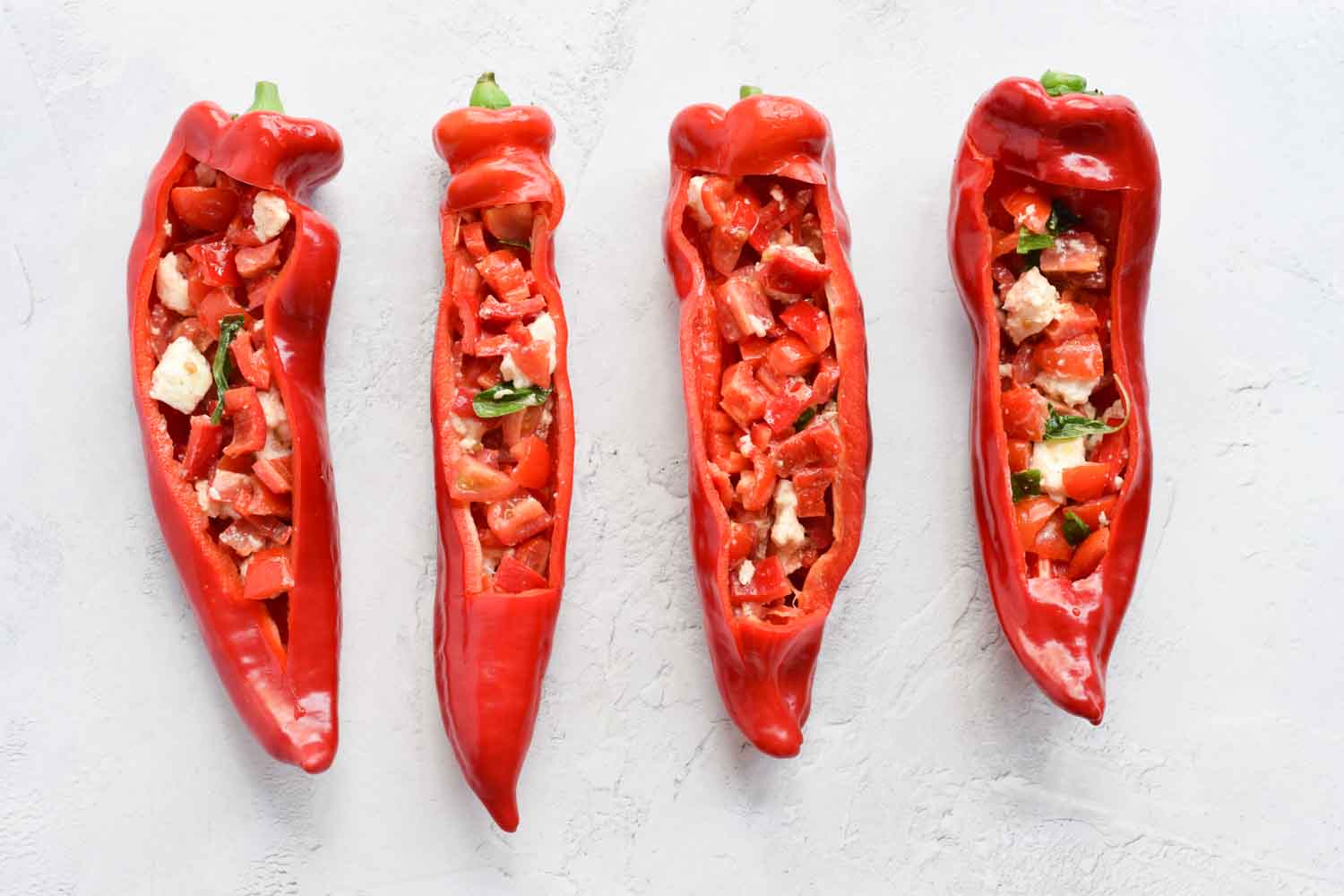 For a while I wasn’t a huge fan of BBQ’s. When everybody got enthusiastic in the summer to organise BBQ’s, I didn’t understand why everybody loved it so much. I always thought BBQ’s were very heavy: lots of meat, eating too much and often that caused stomach issues for me.

Until I realised that you don’t have to do a “standard BBQ” and you can decide yourself what you will put on the BBQ. One of the BBQ recipes that I love to make are low FODMAP stuffed pointed peppers from the BBQ.

As said, with a classic BBQ with 4 pieces of meat per person, you don’t make me happy. If I organise a BBQ, I will make a few nice salads, such as this gluten-free kisir, Greek pasta salad and brie and raspberry salad.

I serve low FODMAP bread with spreads, such as herb butter, muhammara and Turkish eggplant salad.

I also love grilling some vegetables on the BBQ, such as these pointed peppers, vegetable skewers and grilled eggplant with feta and tomato.

For me, the side dishes are more important than the main dishes when I organise a BBQ 😉

Finally, I love to serve fresh fish from the BBQ, such as a piece of salmon or shrimps and I love to make chicken skewers with homemade peanut sauce or köfte kebabs.

As you can see, you can organise a low FODMAP barbecue in a lot of different ways. You can focus on meat or fish dishes, a vegetarian BBQ or a BBQ with lots of side dishes. Just what you like!

This recipe for stuffed pointed peppers will be loved by everyone! The flavour of smoked peppers is delicious and in combination with the filling, this is a real treat.

How to make the stuffed pointed peppers?

The recipe for these pointed peppers is super simple. You cut a little square out of every pepper on the top (make sure they can lay on the most flat side, that is handy on the BBQ).

The pieces that you cut out of the peppers, you. can cut into small pieces.

Take some small tomatoes and a mozzarella and cut it into cubs. Mix these ingredients together in a bowl and season with salt and pepper. Add a small handful of fresh basil leaves.

Fill the peppers with the mixture. Use a baking brush to brush olive oil on the outside of the peppers and then they are ready to go on the BBQ.

I grilled the peppers for about 15 minutes, directly on the rack. You can also put them into an ovendish, if you are scared that the filling will fall out.

Varying with the filling

You can vary with the filling as the peppers as much as you want. You can add another vegetable, such as pieces of zucchini.

You can also use another kind of cheese. Feta is also delicious in this dish. If you want to make the peppers vegan, you can leave out the mozzarella.

Will you let me know if you have made my low FODMAP stuffed pointed peppers? I would love it if you would let me know what you think about the recipe by leaving a comment and a rating below. You can also share your creations with me by tagging me on Instagram @karlijnskitchen or by using the hashtag #karlijnskitchen. 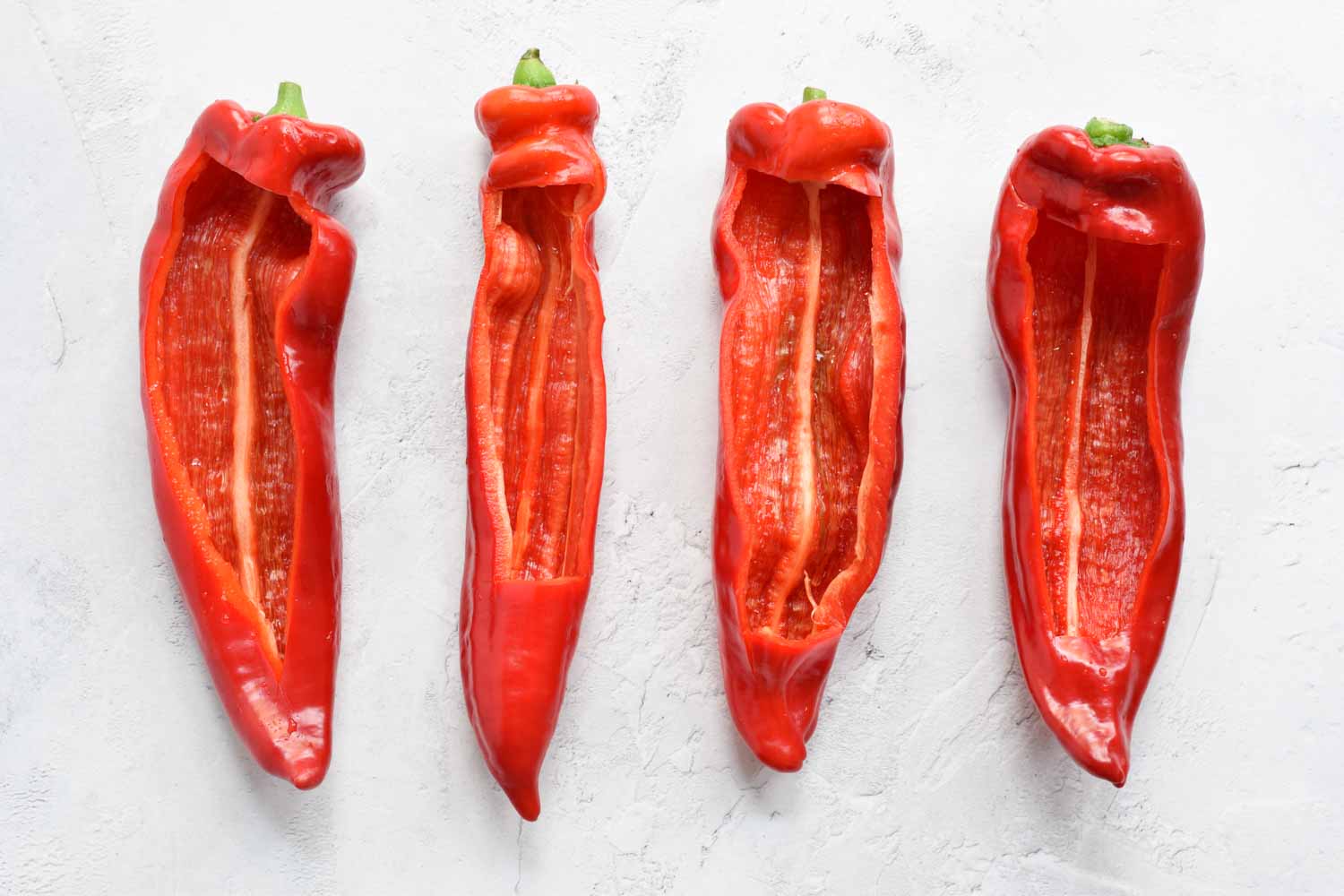