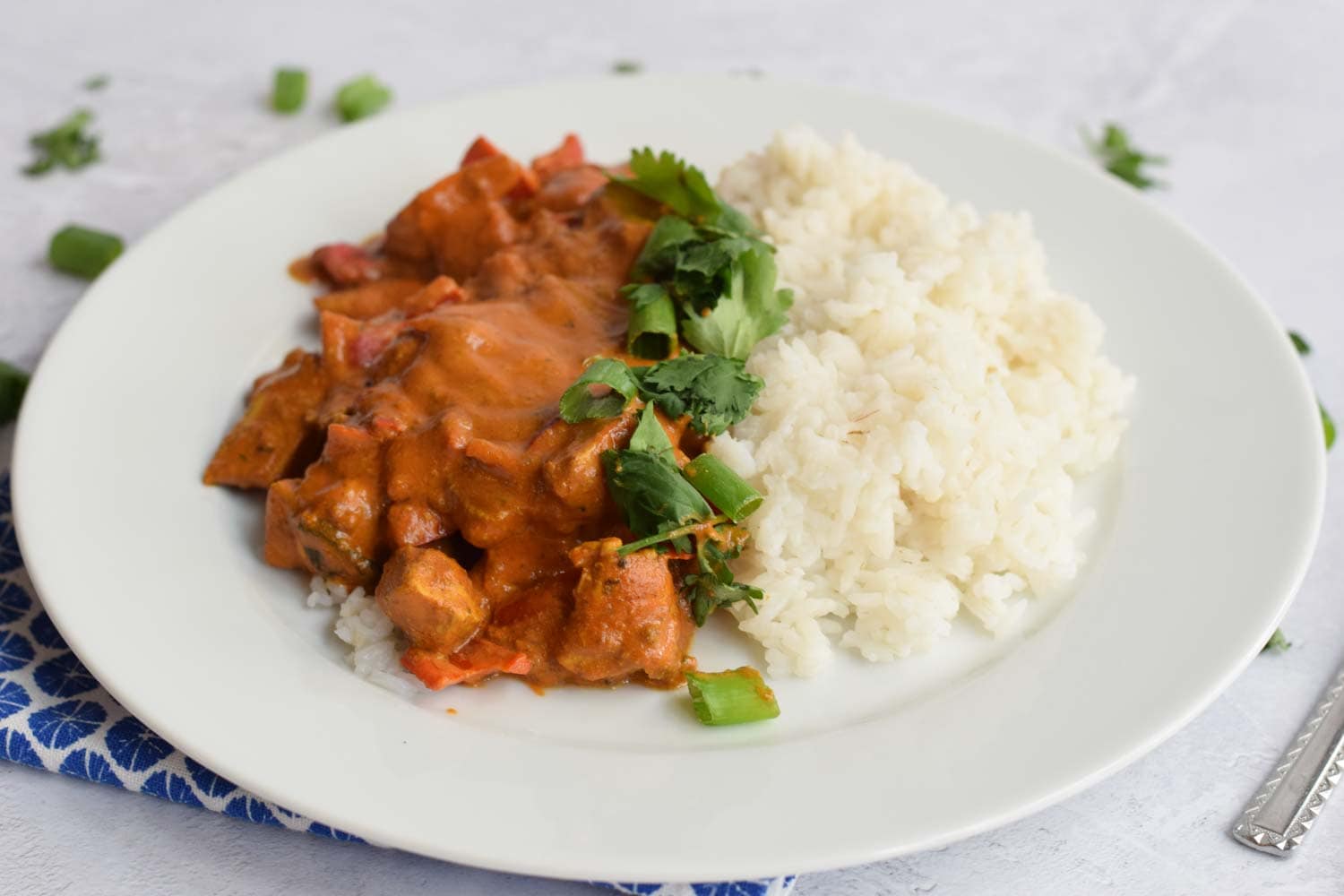 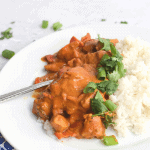 This low FODMAP chicken tikka masala has been a popular recipe on Karlijn’s Kitchen for years. And I am not surprised about that because it is a delicious spicy curry.

Are you not a fan of spicy food? No worries! If you simply add a little less chilli powder, you will make the curry less spicy. Like that you can adapt the recipe to your taste.

Other sources, however, say that chicken tikka masala is simply a variation on butter chicken and is an Indian recipe.

One thing is for sure, it does taste Indian, it is very tasty and easy to make. And that is most important ;)

The basis of this recipe is a homemade masala paste. I have to say that making curry paste from scratch used to stop me from making low FODMAP curries.

If you can buy a ready-made curry pasta in the supermarket that is a little bit quicker. But believe me, making curry paste from scratch is actually not that difficult.

The only thing that you have to do is to put the different fresh and dried herbs and spices and other seasonings together in a bowl.

Blend them with an immersion blender or food processor and then your masala paste is done.

So you can freeze the leftover 80 gram of masala pasta and make two more low FODMAP chicken masala curries for two persons with this. And because you have the masala paste ready, the dish will be super quick to make the next time!

The ingredients of the chicken tikka masala

The most important ingredient of the chicken tikka masala is the masala paste. This consists of the following herbs and spices:

It is quite an amount of herbs and spices, but believe me, this will really give the dish flavour!

The rest of the recipe is super simple. You boil white rice. While the rice is cooking, you fry the chicken in a frying pan.

Then you add a red bell pepper and bake this for a few minutes until it is softened.

To this you add the sieved tomatoes and coconut milk. Leave the sauce to simmer until it thickens. This combination makes the sauce super creamy.

You serve the chicken tikka masala sauce with white rice and some fresh cilantro, if you like.

Adding extra vegetables to this dish

The original version of chicken tikka masala doesn’t contain any vegetables, except for the sieved tomatoes (tomato passata).

I added a red bell pepper to the dish, to have some vegetables in the dish.

Next to that, I serve this curry with a green salad on the side. For example a simple salad with lettuce, tomatoes, cucumber, black olives and a dressing.

Like that, you can enjoy this delicious curry and get your veggies in.

If you want, you can also add extra low FODMAP vegetables to the curry itself. Such as oyster mushrooms, canned mushrooms or broccoli (max. 100 gram per person).

Can I make this recipe vegetarian?

Yes, you can! Replace the chicken with a low FODMAP meat substitute. Such as the vegetarian pieces by Quorn.

If you liked this curry, you might also want to try these recipes from Karlijn’s Kitchen:

Will you let me know if you have made my low FODMAP chicken tikka masala? I would love it if you would let me know what you think about the recipe by leaving a comment and a rating below. You can also share your creations with me by tagging me on Instagram @karlijnskitchen or by using the hashtag #karlijnskitchen.

For the masala paste

For the chicken tikka masala